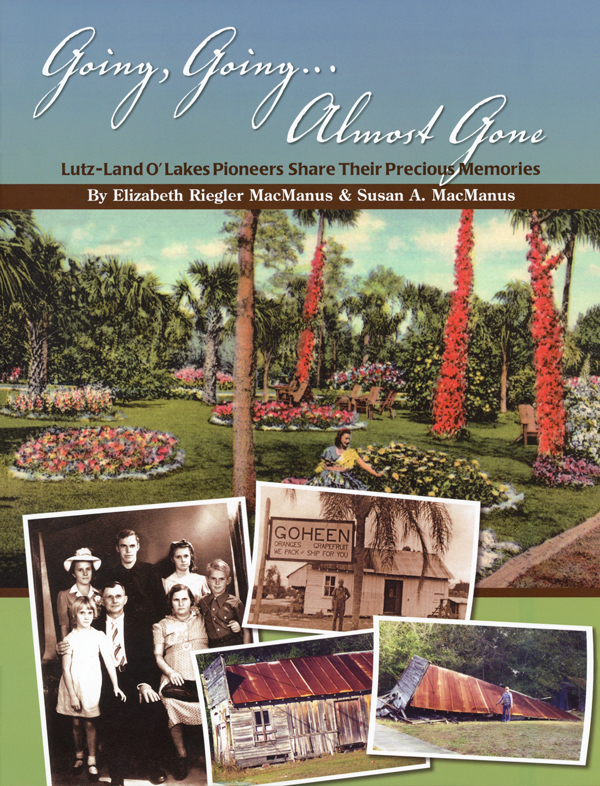 This long-awaited companion volume to Citrus, Sawmills, Critters, & Crackers: Life in Early Lutz and Central Pasco County (now out of print) will be treasured by historians and residents alike. The authors have compiled a remarkable collection of unique documents, family photographs, oral histories, significant facts, and illuminating commentaries that preserve a rapidly vanishing Florida pioneer history. Here is a milestone work that traces agriculture and commerce, presents original maps of businesses and historic landmarks, affirms local customs and traditions, and sets new standards for local and regional history in the years to come.

Elizabeth Riegler MacManus was born in Lutz, Florida on July 18, 1923. MacManus dedicated her life to preserving the history of the Lutz and Land O' Lakes areas. MacManus' father, Mike Reigler was the first permanent resident of the area and became the first person in the area to grow a nursery of citrus. MacManus wrote various works on the history of the area, including Citrus, Sawmills, Critters and Crackers: Life in Early Lutz and Central Pasco County that she co-authored with her daughter Susan MacManus. Considered the definitive history of the area, Citrus, Sawmills, Critters and Crackers preserves many of the oral histories and photographs of the Lutz area that would have otherwise been lost. MacManus taught Sunday school for over 40 years in Lutz and never grew tired of searching for new historical artifacts. She passed away on June 21, 2008 at the age of 84.

She served as Chair of the Florida Elections Commission from 1999 to 2003 and helped the Collins Center For Public Policy, Inc. draft Florida’s Help America Vote Act state plan (voter, election official, and poll worker education section) required by Congress to qualify for federal funding under the Help America Vote Act. She also served as an advisor to the Florida Division of Elections on the development of its statewide poll worker training manual. In 2008, MacManus was appointed by the U.S. Election Assistance Commission to two working groups: the Election Management Guidelines Development Working Group on Elderly and Disabled Voters in Long-Term Care Facilities and the Working Group on Media and Public Relations.

MacManus was a Fulbright Research Scholar at Yonsei University, Seoul, Korea, in 1989, received USF’s Distinguished Research Scholar Award in 1991, and was honored as the Phi Kappa Phi Honor Society’s USF Artist/Scholar in 1997 and designated as a Distinguished University Professor in 1999. She received the first biennial Diane Blair award for “Outstanding Achievement in Politics and Government” from the Southern Political Science Association in 2001. In March 2002, the Florida Political Science Association gave her its Manning Dauer Distinguished Florida Political Science Award. She has been a Reubin O’D. Askew Fellow of the Florida Institute of Government since 1995.

Studies in the Fantastic [#6]

Studies in the Fantastic [#10]