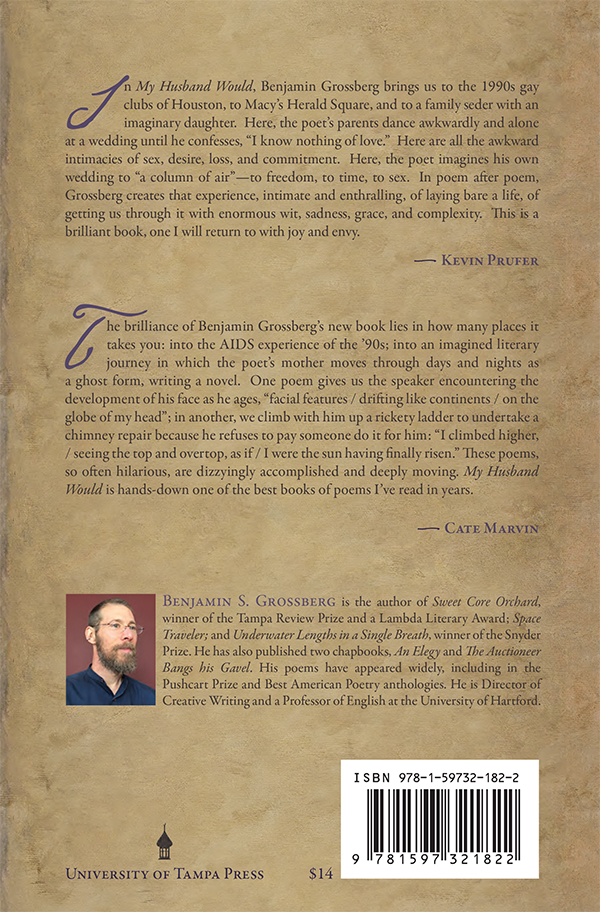 My Husband Would is the fourth full-length collection of poems by Benjamin S. Grossberg, winner of the 2008 Tampa Review Prize and the 2010 Lambda Literary Award. Set at the crossroads of middle age, this book investigates love and family—both the families we are born into and those we create for ourselves. Funny, cinematic, and inventive, the poems recount family lore—a mother’s options, the clouded circumstances of a distant marriage—side by side with the perplexities of contemporary romance. And they are charged with the recent national legalization of same-sex marriage—for many, a radical dawning of possibility, even as it quickly becomes uncontroversial, even unremarkable, in large parts of the country. These poems show us that marriage and family are a learned project, one passed down, to be attempted by each new generation as best it can with the realities at hand. Grossberg surveys the strangeness of what our parents and families teach us about intimacy and what we ourselves learn as we stumble through the landscape of contemporary dating. He finally casts his gaze to future possibility: what we would be, would do, if we could. As Grossberg notes, amid the bustle of our lives, the relationships that help us understand who we are, those losses and discoveries, begin with the simplest impulses, like “the courage/ to go up and say hello.”

In addition to Sweet Core Orchard (University of Tampa Press, 2009), winner of the Tampa Review Prize for Poetry and a Lambda Literary Award, Ben is the author of Space Traveler (University of Tampa Press, 2014) and Underwater Lengths in a Single Breath (Ashland Poetry Press, 2007), winner of the Snyder Prize. He has also published two chapbooks, An Elegy (Jacar Press, 2016) and The Auctioneer Bangs His Gavel (Kent State University Press, 2006), and co-edited an anthology, The Poetry of Capital (University of Wisconsin Press, 2020). His poems have appeared widely, including in the Pushcart Prize and Best American Poetry anthologies. He is Director of Creative Writing and a Professor of English at the University of Hartford.

In Thailand it is Night

In All Their Animal Brilliance