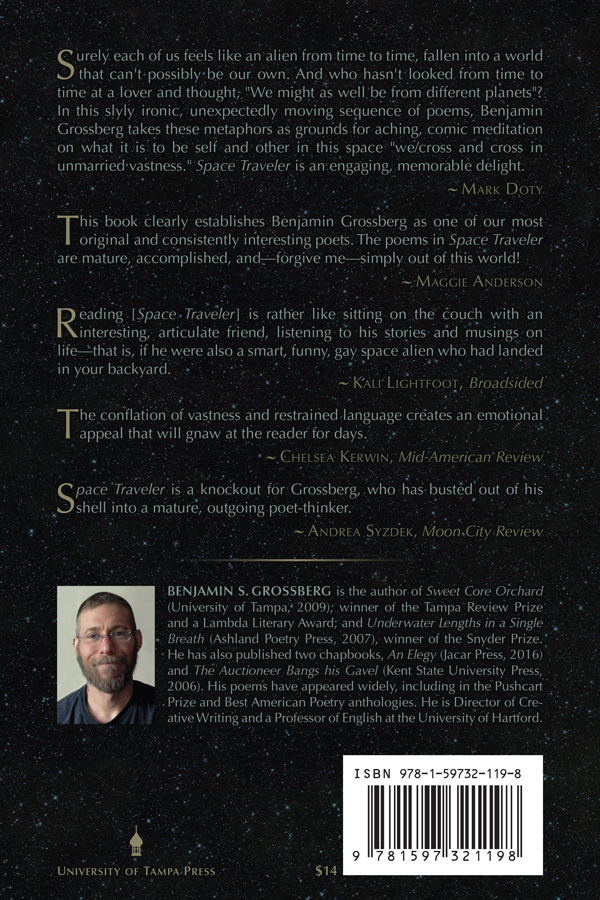 In Benjamin S. Grossberg’s third collection, he forges a new mythology, fresh and contemporary in voice and content, as he examines how we live today, seen through the eyes of another being. Playful, insightful, wide in their arc of associations, the poems of Space Traveler are spoken by an alien traveling from star to star, getting a chance to “observe up close” the variety of outer-space phenomena. Along the way, the space traveler launches into contemplation of the range of subjects that humans encounter—-desire, aging, love and separation, and often addressing us, humanity, directly. The space traveler is sometimes exultant, sometimes bereft, but always finds implicit parallels of language and image between his experience traveling alone through space, and our lives in a contemporary world and a contemporary America. But despite its contemporary observations, the space traveler is the natural heir to ancient Odysseus and his fellow seafarers. He, too, navigates a magical landscape in a long search for home.

Maggie Anderson states that, “this book clearly establishes Benjamin Grossberg as one of our most original and consistently interesting poets.”

In addition to Sweet Core Orchard (University of Tampa Press, 2009), winner of the Tampa Review Prize for Poetry and a Lambda Literary Award, Ben is the author of Space Traveler (University of Tampa Press, 2014) and Underwater Lengths in a Single Breath (Ashland Poetry Press, 2007), winner of the Snyder Prize. He has also published two chapbooks, An Elegy (Jacar Press, 2016) and The Auctioneer Bangs His Gavel (Kent State University Press, 2006), and co-edited an anthology, The Poetry of Capital (University of Wisconsin Press, 2020). His poems have appeared widely, including in the Pushcart Prize and Best American Poetry anthologies. He is Director of Creative Writing and a Professor of English at the University of Hartford.

In Thailand it is Night