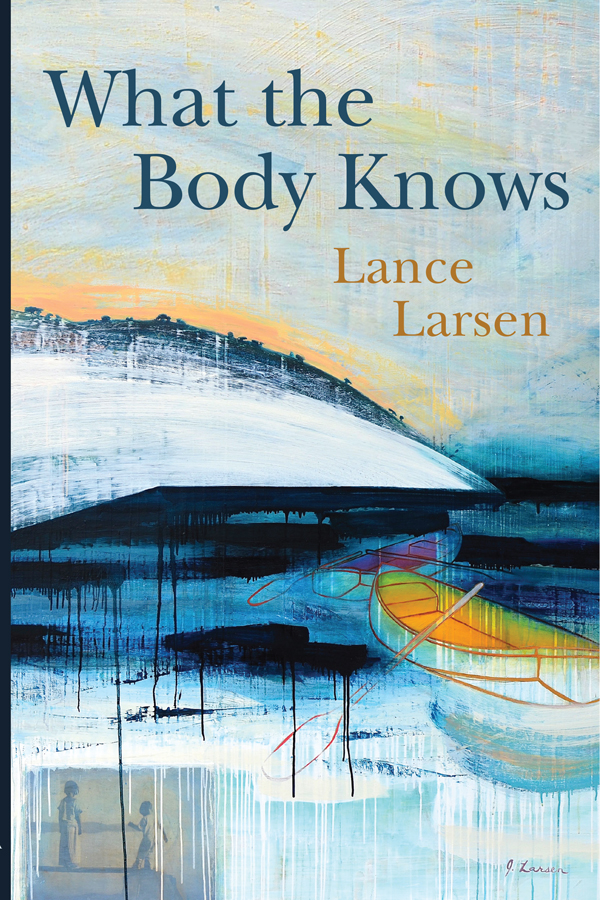 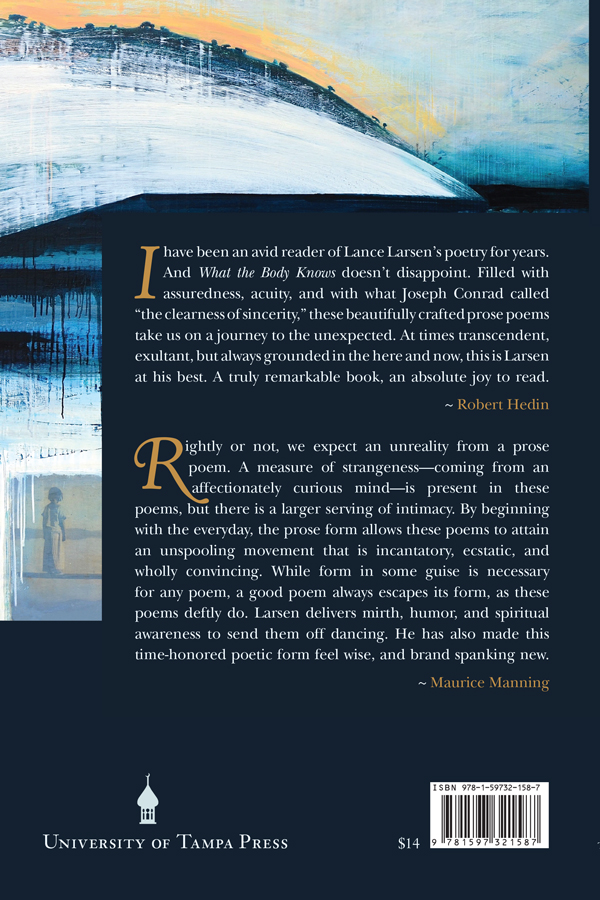 What the Body Knows

What the Body Knows

After our argument, my beloved fled to the flea market. Upon returning, she said, “I still love you. Here’s a door.” Picture a storm door, heavy gauge aluminum, shrunk to 28 by 22 inches and attached to a frame—what she offered in lieu of a make-up kiss . . . . A shower is a door between clean and cleaner. Belief is a door you lay down in a graveyard whereby dead aunts climb out of the dirt. A bed at midday is a door between two people who touch and trade breaths and burn late and exit their bodies like vapor . . . . A cat is a door we keep around the house to remind us we once preferred the world of animals. Morning has come. My door, which is now our door, leans against the wall the way shadows lean into the next life. My cat passes through this practice portal to prove she is still here. I get down on all fours, a rehearsal. I have doors all over my body—open them.

—From “Doors” by Lance Larsen, in What the Body Knows

Lance Larsen’s poetry inhabits a surreal backyard, blooming with zucchini, peonies, hooves and bones, sheet music by Chopin, and God the Father, loping through a vineyard. In 2012, Larsen was named the Utah Poet Laureate, a post he describes as “a kind of itinerant preacher of the word (lower case), or a Johnny Appleseed of the literary artifact.” Fortunately, he has a gift for making words grow. His poems often begin with quick affirmatives (“True…. yes”), as if they first sprouted in casual back-porch conversations and then wheeled off into their own expanding lives. . . . There’s a slantwise echo of the garden in all of Larsen’s poetry. In its fascination with the natural world, both domestic and wild, there’s a longing to connect with the creation, with the other, and with God.

Lance Larsen, who recently completed a five-year appointment as Utah’s poet laureate, is the author of four previous poetry collections: Erasable Walls (1998); In All Their Animal Brilliance (2005), which won the Tampa Review Prize; Backyard Alchemy (2009); and Genius Loci (2013). His poetry and prose appear widely, in such venues as APR, Poetry, Gettysburg Review, River Styx, Southwest Review, Brevity, LIT, TLS, Best American Poetry 2009, Poetry Daily, and Brief Encounters (a Norton nonfiction collection). He has received a number of awards, including a Pushcart Prize and fellowships from Ragdale, The Anderson Center, and the National Endowment for the Arts. His essays have made the Notable Essays list six times in Best American Essays. He is married to Jacqui Larsen and currently serves as chair of the department of English at Brigham Young University.