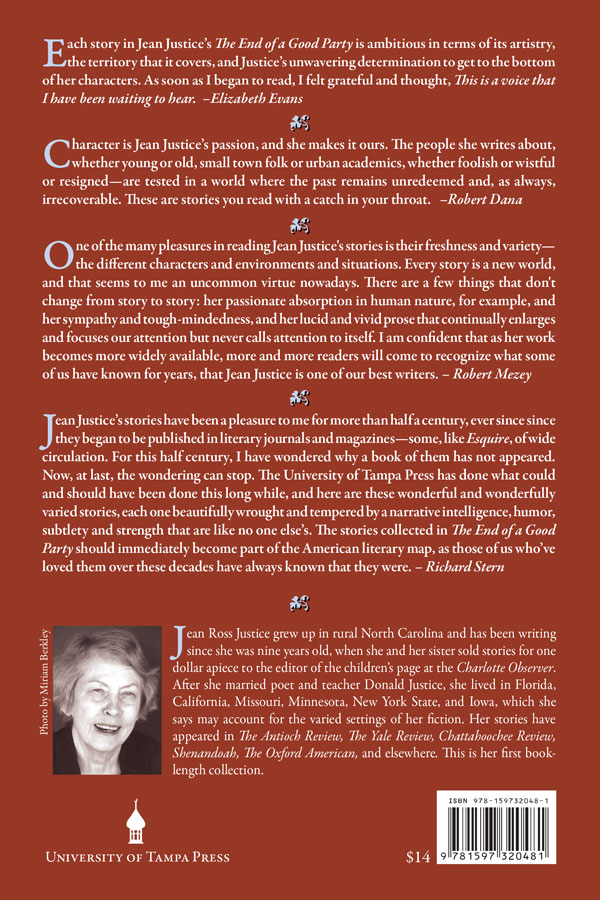 The End of a Good Party

The End of a Good Party

Jean Justice is a writer’s writer who enjoys a long-standing literary reputation among readers and fans who have followed her work for decades. Her stories have appeared in prestigious periodicals ranging from Esquire to The Antioch Review, The Yale Review, and The Oxford American, but this is her first book-length collection. Fellow writers are rejoicing. “The End of a Good Party is ambitious in terms of its artistry,” writes Elizabeth Evans. “As soon as I began to read, I felt grateful and thought, This is a voice that I have been waiting to hear.” Poet Robert Dana says, “These are stories you read with a catch in your throat.” And Richard Stern, recipient of the Medal of Merit for the Novel from the American Academy of Arts and Letters, writes of these stories, “For this half century, I have wondered why a book of them has not appeared. Now, at last, the wondering can stop. The University of Tampa Press has done what could and should have been done this long while, and here are the wonderful and wonderfully varied stories, each one beautifully wrought and tempered by a narrative intelligence, humor, subtlety, and strength that are like no one else’s.”

A Map of Doubt and Rescue