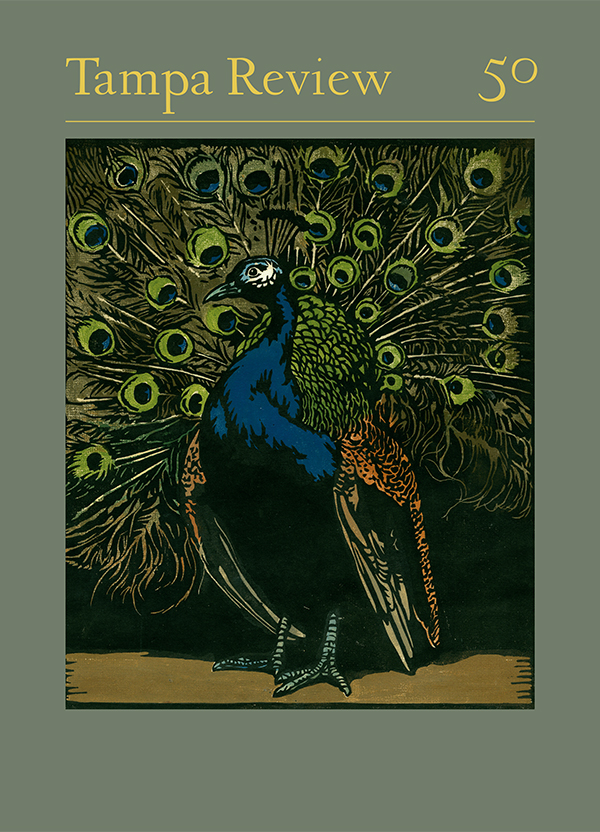 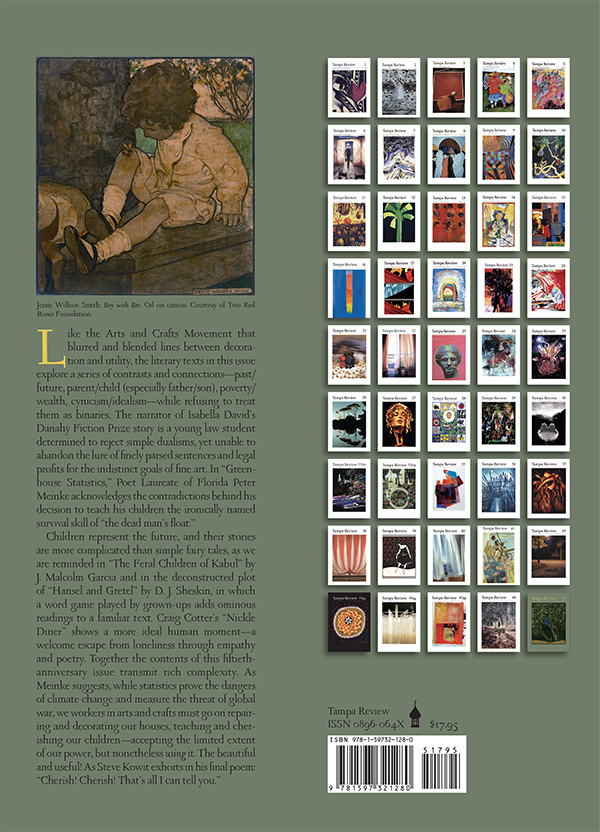 This year Tampa Review celebrates its fiftieth anniversary with this second of two anniversary issues. From a tiny seed, a surprising family tree has grown: from the mimeographed and stapled UT Poetry Review to today’s lithographed Tampa Review, printed in signatures and sewn into hardback covers. Rooted in the literary and artistic community of the Tampa Bay area, we have grown to be Florida’s oldest literary journal, in this issue renewing itself in partnership with one of the area’s newest cultural assets, the Two Red Roses Foundation.

We are proud of our traditions and our strong affinities with the American Arts and Crafts Movement. Its authentic spirit guides us as an independent, nonprofit publisher, dedicated to artistic standards rather than commercial values. In step with the Two Red Roses Foundation and its Museum of the American Arts and Crafts Movement, we rededicate ourselves to strive for and represent the highest aims of visual and literary arts and to practice in our craft the tangible ways of bringing these aims into daily relevance within the world.

Like the Arts and Crafts Movement that blurred and blended lines between decoration and utility, the literary texts in this issue explore a series of contrasts and connections—past/future, parent/child (especially father/son), poverty/wealth, cynicism/idealism—while refusing to treat them as binaries. The narrator of Isabella David’s Danahy Fiction Prize story is a young law student determined to reject simple dualisms, yet unable to abandon the lure of finely parsed sentences and legal profits for the indistinct goals of fine art. In “Greenhouse Statistics,” Poet Laureate of Florida Peter Meinke acknowledges the contradictions behind his decision to teach his children the ironically named survival skill of “the dead man’s float.”

Children represent the future, and their stories are more complicated than simple fairy tales, as we are reminded in “The Feral Children of Kabul” by J. Malcolm Garcia and in the deconstructed plot of “Hansel and Gretel” by D. J. Sheskin, in which a word game played by grown-ups adds ominous readings to a familiar text. Craig Cotter’s “Nickle Diner” shows a more ideal human moment—a welcome escape from loneliness through empathy and poetry. Together the contents of this fiftieth-anniversary issue transmit rich complexity. As Meinke suggests, while statistics prove the dangers of climate change and measure the threat of global war, we workers in arts and crafts must go on repairing and decorating our houses, teaching and cherishing our children—accepting the limited extent of our power, but nonetheless using it. The beautiful and useful! As Steve Kowit exhorts in his final poem: “Cherish! Cherish! That’s all I can tell you.”

A University is Born